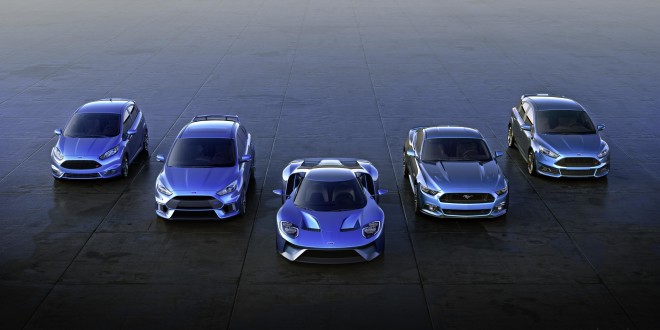 A new era for fast Fords is dawning with the start of production of the all-new Focus RS performance hatch.

Among models driving demand are the all-new Focus RS, the first of which has just rolled off the production line in Saarlouis, Germany; the Ford Mustang sports car for which Ford has now taken more than 13,000 orders in Europe (including 2,650 in the UK); and the Focus ST and Fiesta ST hot hatch models.

With the all-new Ford GT still to come, Ford offers the most comprehensive range of performance models from compact hatchbacks to high performance supercars.

“This will be a truly remarkable year for Ford performance cars, with unprecedented performance capability, as well as sophisticated powertrain and chassis technologies including the new Ford Performance All Wheel Drive system for Focus RS,” said Joe Bakaj, vice president, Product Development, Ford of Europe.

The Focus RS is one of 12 new performance vehicles Ford will bring to customers globally through 2020. Developed by a team of Ford Performance engineers in Europe and the U.S., the model is powered by a specially engineered version of Ford’s new 2.3-litre EcoBoost engine delivering maximum power of 350PS and sprinting from 0‑62 mph in 4.7sec, making the high-performance hatchback the fastest accelerating Ford RS model ever.

Since prices were announced in September, customers have already placed more than 3,100 orders (2,300 of those in Britain), with a further 250,000 configured online.

The Ford Mustang was the best-selling sports car across the globe during the first half of the 2015, according to global IHS Automotive registration data.*

Sales of the Ford Focus ST increased 160 per cent in 2015, compared with 2014, following the introduction early in the year of a new model available for the first time with a diesel engine. **

The new Ford Focus ST mixes performance with practicality; available in five-door and wagon bodystyles and with a new 185PS 2.0-litre diesel engine that delivers 400Nm of torque from 2,000-2,750 rpm alongside the proven 250PS 2.0-litre EcoBoost petrol engine.

Following the introduction of the new model in early 2015, 47 per cent of customers chose the diesel powertrain, which recently was made available with a 6-speed dual-clutch PowerShift transmission.

The Fiesta ST quickly established itself as the leading small performance hatchback in Europe following its introduction in Europe and around the world, with more than 20 awards and accolades within its first year on sale. Powered by a 182PS 1.6-litre EcoBoost engine, the Fiesta ST sprints 0-62mph in 6.9 seconds. More than 30,000 Fiesta STs have now been sold across Europe, with more Fiesta ST news scheduled for later this year.

The first all-new Ford GT ultra-high-performance supercars also will go into production for a limited number of customers in Europe in late 2016.

Propelled by the most powerful Ford EcoBoost production engine ever – producing more than 600 horsepower and demonstrating remarkable efficiency – paired with a seven-speed paddle-shift transmission, the Ford GT is an ultra-high-performance supercar that serves as a technology showcase for Ford EcoBoost performance and innovations in aerodynamics and lightweight carbon fibre construction.