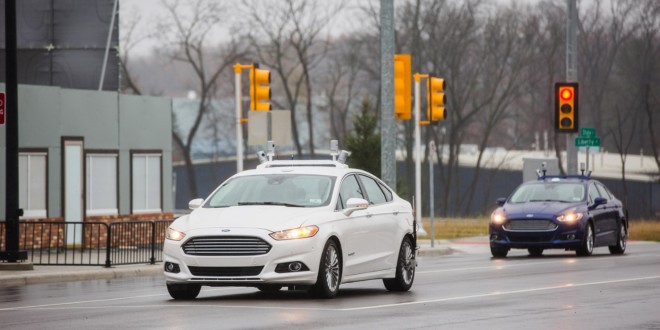 Ford is tripling its fleet of fully autonomous Ford Fusion Hybrid test vehicles – making it the largest in the automotive industry – and will use a new-generation sensor technology as the company further accelerates its autonomous vehicle development plans.

This year, Ford will add 20 Fusion Hybrid autonomous vehicles to the company’s autonomous fleet, bringing the total number to 30 vehicles being tested on roads in California, Arizona and Michigan.

“Using the most advanced technology and expanding our test fleet are clear signs of our commitment to make autonomous vehicles available for millions of people,”said Raj Nair, Ford executive vice president, Global Product Development, and chief technical officer. “With more autonomous vehicles on the road, we are accelerating the development of software algorithms that serve to make our vehicles even smarter.”

Building on more than a decade of Ford autonomous vehicle research, this expansion is a key element ofFord Smart Mobility – the plan to take Ford to the next level in connectivity, mobility, autonomous vehicles, the customer experience, and data and analytics. The newest vehicles represent Ford’s third-generation autonomous vehicle development platform, and are based on Ford Fusion Hybrids, similar to the second-generation platform.

Ford recently announced that its fully autonomous cars will take to the streets of California this year. The company already tests autonomous vehicles at its proving grounds, as well as on public roads in Michigan. Ford was the first automaker to test a fully autonomous vehicle at Mcity – a 32-acre, full-scale simulation of a real-world urban environment at the University of Michigan.

Advances in sensing, software and hardware

Solid-State Hybrid Ultra PUCK Auto’s lightweight, sleek design makes it easier to package on a vehicle, such as on the wing-mirror. The design, which also has an improved targeted view, means Ford can reduce the amount of LiDAR sensors from four to two on new Fusion Hybrid autonomous vehicles, and still get the same amount of useful data.

Ford was among the first to use the Velodyne LiDAR sensor, an innovation that significantly changed the autonomous vehicle landscape. LiDAR emits short pulses of laser light to precisely scan the surrounding environment millions of times per second and determine the distance to objects, allowing the vehicle to create a real-time, high-definition, 3D image.

Ford was one of only six teams to participate in both the DARPA Desert Classic and Urban Finals challenges, supported by four engineers who still are on the company’s autonomous vehicle development team.

“We’ve come a long way since DARPA,” said McBride. “A decade ago, no one in the field knew what the art of the possible was. Today, we’re all hustling to make the most ambitious dreams become a reality.”

The first-generation autonomous vehicle platform helped Ford understand that fully autonomous driving was technically feasible in the near future and how, through ambitious research, it could achieve this.

Fusion Hybrids were chosen for the second-generation vehicles because they have the newest and most advanced electrical architecture. With the latest generation of computers and sensors – including the smaller, but more advanced Velodyne LiDAR HDL-32E sensor – Ford’s autonomous vehicle platform moved a step closer to production.

The objective of the second-generation vehicle fleet is to test many of the computing and sensor components required to achieve fully autonomous driving capability, as defined by SAE International Level 4, which does not require the driver to intervene and take control of the vehicle.

Last summer, Ford transitioned from the research phase of development to the advanced engineering phase.