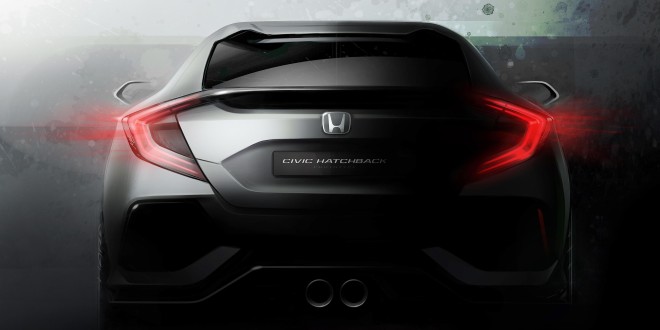 Honda is set to unveil the next step in the renewal of its European car range at the 2016 Geneva Motor Show, including the global premiere of the Civic Hatchback Prototype.

The Civic Hatchback Prototype receives its global premiere at Geneva Motor Show, previewing the exterior design of the all-new hatchback model, scheduled for a European launch in early 2017. Produced at Honda of the UK Manufacturing (HUM), the car will be exported to global markets, including the US.

Following the announcement of the start of customer sales in the US at Detroit motor show, Honda confirms the first European customer deliveries for the Honda NSX will begin in 2016. The NSX features classic low and wide proportions married to modern and alluring surfacing, an aggressive front design, and rear lights that pay homage to the original NSX. The new hybrid supercar has an all-new mid-mounted DOHC V6 engine with twin turbochargers mated to a specially-developed nine-speed DCT.

Inheriting the “go anywhere” spirit of its celebrated predecessors, the all-new CRF1000L Africa Twin packs an innovative and powerful parallel twin-cylinder engine into a lightweight, agile chassis ready for true adventure both on and off road, whether crossing continents or commuting.