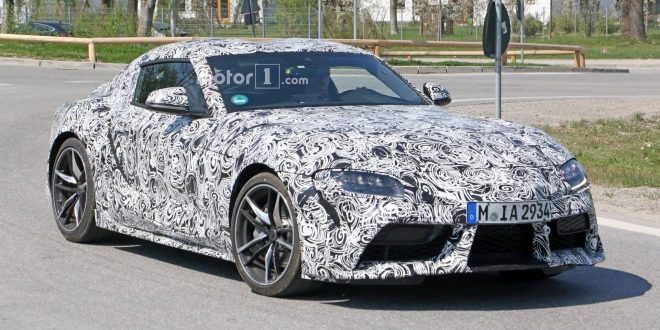 As for the car itself, although dipped in camouflage from front to rear, was flaunting the now familiar double bubble roof, a prominent rear spoiler, and most of the taillights. We also get to see the two fat exhaust tips and an F1-like central LED fog light between them. Unless the swirly disguise is playing tricks on us, the rear bumper appears to be hosting vertical slats on its sides, which hopefully serve an actual purpose rather than simply being two pieces of plastic.

Moving at the front of the Supra, the headlights are mostly uncovered and are likely of the LED kind. Aside from incorporating those huge air intakes, the bumper has extra vents towards its sides, next to the corners of the lighting clusters. Overall, the design echoes the exterior appearance of Toyota’s FT-1 concept.