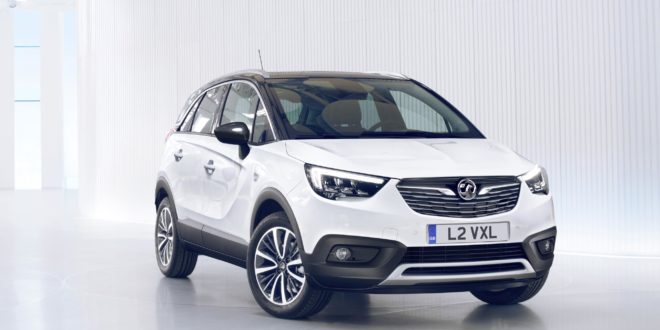 Crisp and compact on the outside, spacious and flexible on the inside, with unique two-tone paintwork and SUV-styling, these are the first pictures of Vauxhall’s all-new Crossland X.

The newcomer adds a second vital ingredient to Vauxhall’s burgeoning SUV offering, which is due to grow still further in 2017 with the launch of the larger Grandland X later in the year. While the Crossland X’s recently-launched sibling, the Mokka X, has all-wheel-drive capability, is 70mm higher and has larger wheels for buyers with a taste for adventure, the Crossland X has a firm family focus, with a Tardis-like cabin providing high degrees of practicality and flexibility.

And at just 4.21 metres in length the Crossland X is more compact than the Mokka X, and a full 16cm shorter than the Astra Hatch, offering owners greater convenience while driving and manoeuvring in towns and cities. Adding to Crossland X’s urban appeal is an elevated seating position and an overall height, which is raised ten centimetres above the Astra’s.

The Crossland X also enters a different SUV class to the Mokka X, with rivals such as the Renault Captur and Peugeot 2008. The Mokka X’s competitors include the Nissan Juke and Skoda Yeti.

Exceptional driver and passenger comfort has been an obvious priority for a car entering this class. The Crossland X has specially designed AGR-certified seats for the driver and front passenger, while rear passengers can adjust their seating position to increase leg room. This seating flexibility is equally valuable for luggage capacity, which is a class-leading 410 litres with the rear seats up. The flexibility of the rear seats allows the luggage capacity to be increased if additional leg room is not required.

The cutting-edge technology is not limited to driver assistance and safety features though, with drivers benefitting from exceptional connectivity that is becoming the norm in Vauxhall models. Vauxhall OnStar, as well as IntelliLink infotainment systems, compatible with Apple CarPlay and Android Auto, keeps drivers connected in a convenient and responsible way through an up to eight-inch colour touchscreen. An extensive petrol/diesel engine portfolio with manual and automatic transmissions also features.

“Crossland X is as multi-talented as it is stylish,” said Rory Harvey, Vauxhall’s Chairman and Managing Director. “It will appeal to buyers with families who demand agility and convenience in urban driving, but with enough comfort and performance to cover long distances at the drop of a hat. Our customers’ expectations are changing, so the timing is perfect for an additional model in the Vauxhall range, which caters for a new breed of buyer.”

Since 2012, the Mokka (which has recently been replaced by the new Mokka X) has found more than 120,000 buyers in the UK, its single biggest market in Europe, and this has been set against an SUV segment which have grown year-on-year. The Crossland X is set to bring still more growth when it goes on sale this summer.

Forming the first part of Vauxhall’s ‘Five-Star’ 2017, which will see five major product launches in just one year, the Crossland X will be joined by another newcomer to the ‘X’ family, the larger Grandland X which will compete in the compact SUV class (SUV C-segment) later this year.