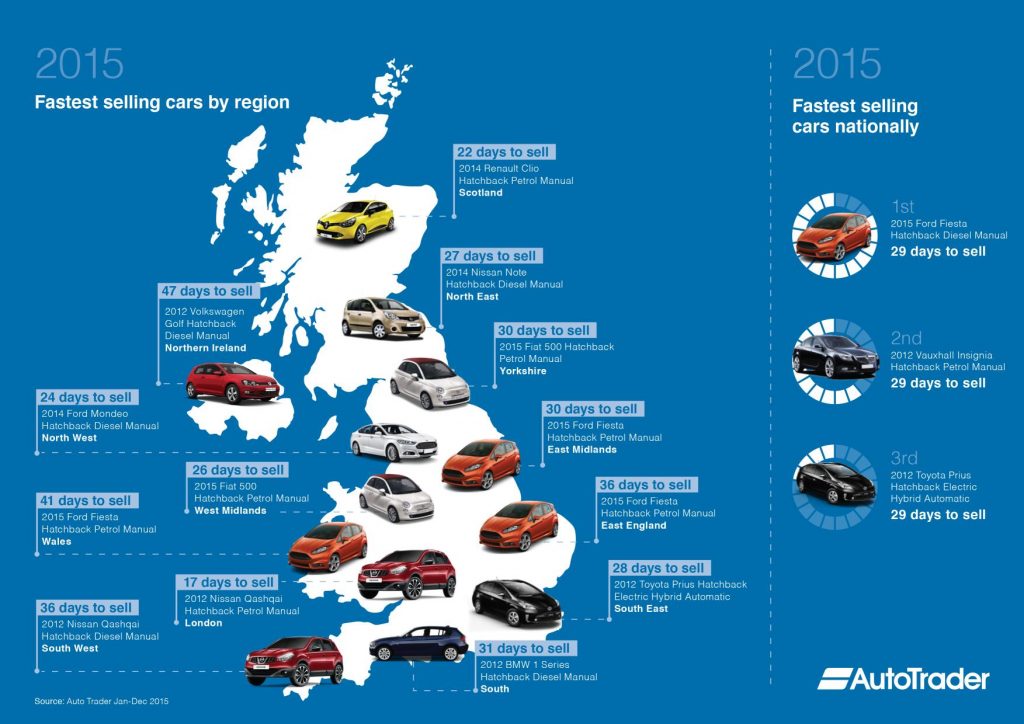 The Ford Fiesta has been named as the UK’s fastest selling used car of 2015, taking an average of just 29 days to sell. The popular hatchback features in every regional top 10 list bar one for last year, and in most cases, multiple times.

The Vauxhall Insignia and Toyota Prius were second and third respectively, both also taking 29 days to sell. 2015 was the first time an alternative fuel vehicle has finished in the annual list, while diesel remains the most popular choice in the UK, fueling six of the top ten.

Ford was the most popular fastest selling marque, with Fiesta and Focus models appearing in every regional top ten list for 2015. The East of England was dominated by the blue oval with Fiesta models taking first, second, third, fifth and eighth position, and Focus models finishing seventh and tenth. Wales also succumbed, with the Fiesta first, second, third and seventh, and the Focus, fourth.

Karolina Edwards-Smajda, Auto Trader Retailer & Consumer Products Director said: “2015 has been a phenomenal year for Ford, topping both the new and used car lists with its Fiesta model. The versatile and economic hatchback is likely to only increase in popularity as Ford announce plans to make their vehicles even more efficient at the Detroit motor show last week.”

The North East remained Nissan territory as the Note took first and third places, the Juke forth, and the Qashqai fifth. The Qashqai continues to be a popular choice amongst car buyers across the UK, placed sixth in the national top ten, and taking just 17 days to sell to be the fastest selling used car in London.

Vauxhall, not content with a second place finish overall, also saw their popular Corsa model appear in the top ten in nearly all regions, in most cases; more than once.

Auto Trader customers who use the i-Control data intelligence tool took, on average, less than half the time to sell stock. The tool supports retailers with, improving their stock turn, optimising margin as well as helping to save time in decision making, by giving retailers an idea of which cars are desirable in their region and are therefore quick to sell. i-Control has been designed to allow used car retailers to take advantage of the market’s most lucrative opportunities to sell more cars, by putting retailers in control of all the relevant data on every piece of used car stock; including unique consumer demand/ desirability – and accurate daily retail and trade prices, for optimising margin and stock turn. Since i-Control was introduced 18 months ago, the average monthly stock turn of those who actively use the tool was just 29 days, compared to an average of 67 days for those who do not.

“The reduction in stock turn for retailers using i-Control is an extremely positive result,”said Karolina Edwards-Smajda. “The i-Control tool has proven itself incredibly popular with Auto Trader customers, with many now relying on the data analysis system to source locally desirable stock and price it to the live market which in turn, has helped them to turn their forecourt twice as fast as the rest of the market.”