BMW GROUP THE NEXT 100 YEARS 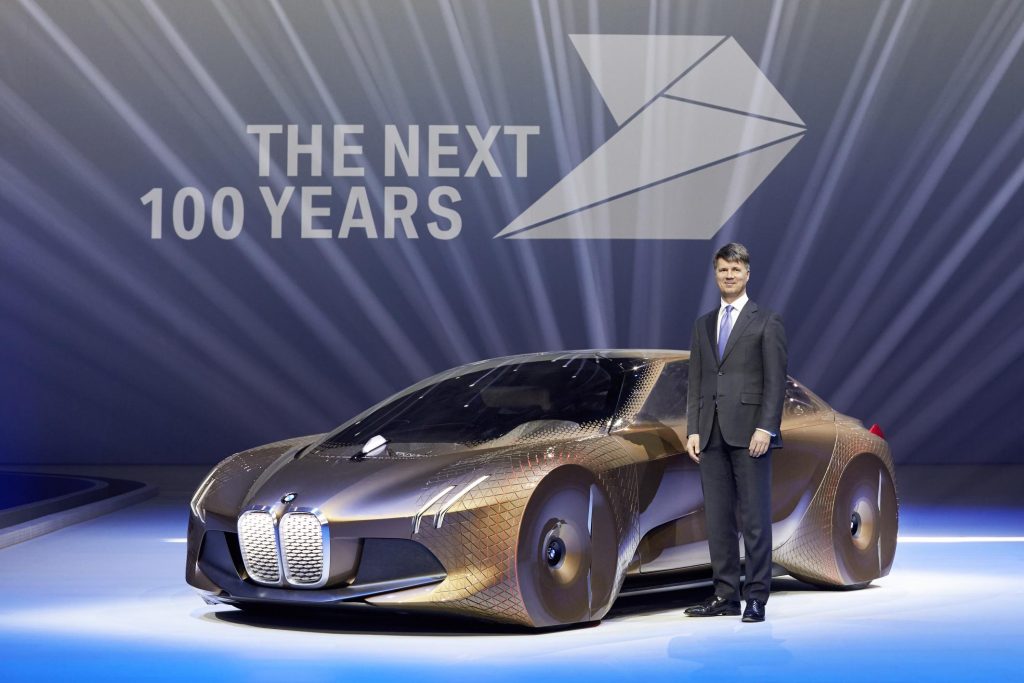 From driver to Ultimate Driver – through digital intelligence.

In the future, BMW drivers will still want to spend most of the time they are in their car at the wheel. In the BMW VISION NEXT 100, the driver will remain firmly in the focus, with constant connectivity, digital intelligence and state-of-the-art technologies available for support. But that’s not all: the BMW VISION NEXT 100 will turn the driver into the Ultimate Driver. So even though the world may well be changing, Sheer Driving Pleasure is here to stay – and will be more intense than ever before.

In designing the BMW VISION NEXT 100, the starting point was the interior. In the years ahead, the driver’s wellbeing will become increasingly important, and rather than merely feeling they are in a machine that drives itself, they should sense that they are sitting in one that was specifically designed for them. This idea gave rise to an architecture in which the cab seems particularly spacious compared with the overall size of the vehicle while retaining the typical exterior lines of a BMW. Despite its domed interior, the BMW VISION NEXT 100 retains the instantly recognisable athletic silhouette of a BMW saloon.

The design of the interior permits various modes of operation: Boost mode, in which the driver is at the controls, and Ease mode, in which the driver can sit back and let the vehicle take over. In Ease, the vehicle becomes a place of retreat with plenty of space, agreeable lighting and a comfortable atmosphere. In Boost, the driver takes over and benefits from the subtle and intuitive support offered by the vehicle. All the time, the vehicle is learning more and more about the person at the wheel, thanks to its sensory and digital intelligence, which the BMW Group calls the Companion. The Companion progressively learns to offer the right kind of support to transform the driver into the Ultimate Driver.

A very important element of the Vision Vehicle is another innovation known as Alive Geometry, the likes of which have never before been seen in a car. It consists of a kind of three-dimensional sculpture that works both inside and outside the vehicle.

Alive Geometry consists of almost 800 moving triangles which are set into the instrument panel and into certain areas of the side panels. They work in three dimensions, communicating very directly with the driver through their movements, which are more like gestures than two-dimensional depictions on a display. Even the slightest peripheral movement is perceptible to the driver. In combination with the Head-Up display, Alive Geometry uniquely fuses the analogue with the digital.

The triangles work in much the same way as a flock of birds in controlled flight, their coordinated movements acting as signals that are easily comprehensible to those inside the car. Combined with the Head-Up display, they involve the driver in a form of preconscious communication, where an intuitive signal predicts an imminent real-time event.

Various approaches can already be seen today that appear to confirm the feasibility of this solution. Rapid prototyping and rapid manufacturing, for example, are gaining importance all the time and are likely to be commonplace 30 years from now. Although at present it remains difficult to imagine how hundreds of tiny triangles could be coordinated to make Alive Geometry work, in the years ahead, it will be possible, as today’s standard vehicle manufacturing methods are replaced. In the future it will become feasible to produce far more complex and flexible forms. This is why, in the context of the BMW VISION NEXT 100, the BMW Group refers to 4D printing, a process which adds a fourth level to components: the functional one. In the years ahead, printed parts manufactured in this way will directly integrate functions which today have to be designed and produced separately before being incorporated into the whole.

At the moment, the digital world is strongly linked to displays; the next step will be organic LEDs – in other words, displays that can freely change shape. However the Vision Vehicle suggests there will at some point be no more displays at all. Instead the entire windscreen will serve as a giant display, directly in front of the driver. In the future the digital and physical worlds will merge considerably, as is also expressed through Alive Geometry, for example, in the way the analogue dashboard interacts with the digital Head-Up Display in the front windscreen.

Boost and Ease driving modes for driver- or vehicle-controlled operations.

In Boost and Ease mode alike, the elements and technologies of the vehicle make for the most intense or relaxed driving experience, depending on what is required. Transitioning between modes is impressive and perfectly orchestrated, and Alive Geometry remains relevant throughout. In Boost, when the driver is concentrating fully on the road, Alive Geometry highlights the ideal driving line or possible turning point and warns of oncoming vehicles. Rather than making the driver drive faster, this kind of support sets out to make them drive noticeably better. In addition, intuitive feedback has a more physical and immediate impact than a robotic voice or instructions on a screen. In Ease mode, on the other hand, Alive Geometry is more discreet in its movements, informing occupants about the road ahead and any acceleration and braking manoeuvres that are about to happen.

In Boost mode, the entire vehicle focuses on the driver, offering intelligent support to maximise the driving experience. The seat and steering wheel change position, and the centre console moves to become more strongly oriented toward the driver. As the journey proceeds, the driver can interact with the vehicle via gesture control.

The contact analogue BMW Head-Up Display of the future uses the entire windscreen to communicate with the driver. In Boost mode, it focuses exclusively on what really matters to the driver: information such as the ideal line, turning point and speed. In addition, full connectivity, intelligent sensors and permanent data exchange allow the Head-Up Display to generate a digital image of the vehicle’s surroundings. In foggy conditions, for example, this means the driver can benefit from information such as vehicles crossing ahead, before they actually come into sight. In addition, by learning more and more about the driver, the system continuously improves, concentrating on creating at all times the most intense and personal driving experience possible.

The transition to Ease mode brings about a complete change of interior ambience. The steering wheel and centre console retract and the headrests move to one side to create a relaxed and welcoming atmosphere. The seats and door panels merge to form a single unit, allowing the driver and passengers to sit at a slight angle. This makes it easier for them to face each other and sit in a more relaxed position for easier communications. Meanwhile, the Head-Up Display offers occupants personalised content along with the information and entertainment they desire.

Depending on the driving mode, the focus of the vehicle changes, concentrating on essentials for the driver in Boost mode, and the surroundings and atmosphere in Ease mode, highlighting the impressive landscapes or buildings of interest that the car is passing by, for instance.

Whether the vehicle is in Boost or Ease mode is also clearly apparent to other road users as the trademark kidney grille, double headlights and L-shaped rear lights act as communication tool. Their different colours of light indicate which mode the vehicle is currently in.

The Companion is symbolised by a small sculptural element which represents the driver-vehicle connection. Shaped like a large, cut gemstone, it is positioned in the centre of the dashboard, just beneath the windscreen, where it symbolises the intelligence, connectivity and availability of the BMW VISION NEXT 100. It also represents the constant exchange of data: the more it learns about the owner and their mobility habits, the smarter it becomes. At some stage it knows the driver well enough to automatically perform routine tasks for them and offer suitable advice when needed. Irrespective of the vehicle itself, constant learning makes the Companion increasingly valuable to its owner.

The Companion also plays an important role in driver-vehicle communications when the car transitions from Boost to Ease mode. While the driver concentrates on the road in Boost mode, the Companion remains flat in the dashboard. But when the BMW VISION NEXT 100 takes control in Ease, it rises up to create an interface with the windscreen. A signal light tells the driver that the car is ready for fully autonomous driving. For other road users, the Companion has a similar function, signalling through its own light as well as that of the vehicle that the car is operating in automated mode. In certain traffic situations, the Companion is in visual contact with other road users, helping pedestrians to cross the road by means of the green light gradient on the front of the vehicle.