CELEBRATING THE LEGEND: LAST OF THE CURRENT LAND ROVER DEFENDERS IS BUILT IN SOLIHULL 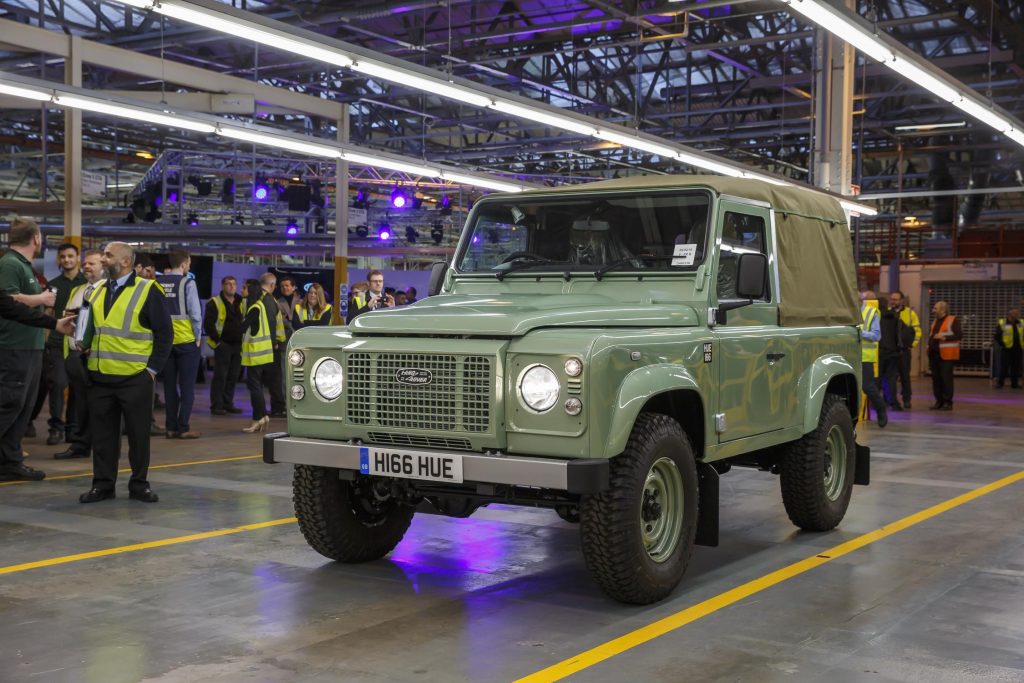 Land Rover celebrated 68 years of history today as the last of the current Defenders was produced at its famous Solihull production facility.

To mark the occasion Land Rover invited more than 700 current and former Solihull employees involved in the production of Series Land Rover and Defender vehicles to see and drive some of the most important vehicles from its history, including the first pre-production ‘Huey’ Series I as well as the last vehicle off the production line, a Defender 90 Heritage Soft Top.

At the same time, Land Rover announced a new Heritage Restoration Programme, which will be based on the site of the existing Solihull production line. A team of experts, including some long serving Defender employees, will oversee the restoration of a number of Series Land Rovers sourced from across the globe. The first vehicles will go on sale in July 2016.

Dr Ralf Speth, CEO of Jaguar Land Rover, said: “Today we celebrate what generations of men and women have done since the outline for the Land Rover was originally drawn in the sand. The Series Land Rover, now Defender, is the origin of our legendary capability, a vehicle that makes the world a better place, often in some of the most extreme circumstances. There will always be a special place in our hearts for Defender, among all our employees, but this is not the end. We have a glorious past to champion, and a wonderful future to look forward to.”

Nick Rogers, Group Engineering Director at Jaguar Land Rover, added: “This is a special day of fond celebration for Jaguar Land Rover. We all have personal memories of Defender. It’s a true motoring icon and is much loved around the world. The world has changed dramatically in the last 68 years, but this vehicle has remained a constant – something no other vehicle can claim. The last of the current Defender models embraces the vehicle’s simplicity, honesty and charm – it represents its Series Land Rover heritage. Creating the Defender of tomorrow, a dream for any engineer or designer, is the next exciting chapter and we are looking forward to taking on that challenge.”

The Defender Celebration in Solihull saw more than 25 unique vehicles from Land Rover’s history come together in a procession around the Solihull plant, featuring the final current Defender vehicle off the line. Land Rover associates were joined by a number of previous employees from the past 68 years to help celebrate this historic day. The last of the current Defender vehicles includes an original part that has been used on Soft Top specifications since 1948 – the hood cleat. The vehicle will be housed in the Jaguar Land Rover Collection.

Land Rover fans are invited to upload their most memorable journeys ever undertaken in Series Land Rover or Defender vehicles via an upcoming online ‘Defender Journeys’platform, announced today. Effectively a digital scrapbook, Land Rover aims to collate as many exciting adventures as possible into this online map, which users can view and share.