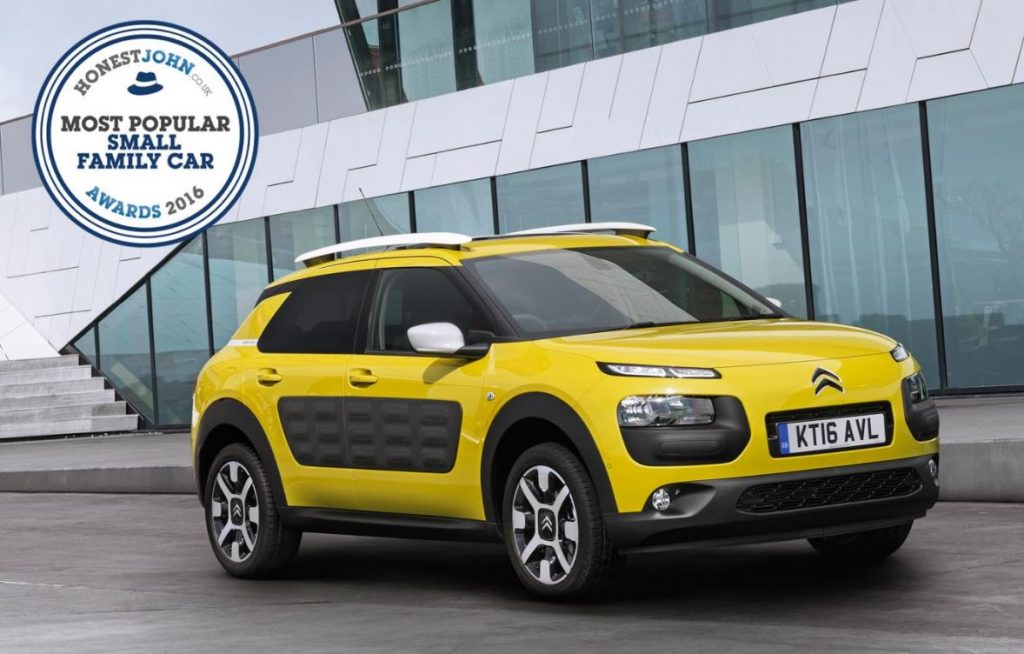 Citroën C4 Cactus has once again won the accolade of ‘Most Popular Small Family Car’ in the Honest John Awards 2016. The award winners are recognised based on the car reviews that generated the most user interest on the HonestJohn.co.uk website over the past year. Scooping the honour for the second consecutive year, Citroën C4 Cactus demonstrates its continued dominance and popularity in this hotly contested category.

The ultra-stylish Citroën C4 Cactus has been named the ‘Most Popular Small Family Car’ for the second consecutive year in the Honest John Awards 2016.

Now in their sixth year, the Honest John Awards recognise and reward the cars and vans whose reviews created the most interest amongst their website users over the past twelve months.

Dan Harrison, editor of honestjohn.co.uk commented; “For the second year in a row, the Citroën C4 Cactus has come out on top in the Most Popular Small Family Car award – that’s no mean feat given this category accounts for a huge number of page views on the site. The unique and distinctive C4 Cactus has once again proved a real hit with our audience who love the fact it is such good value for money. The C4 Cactus shows Citroën at its best, designing cars that are quirky yet have mass appeal.”

Bek Hassan, Citroën UK’s Managing Director, said; ‘It’s an excellent achievement to win the ‘Most Popular Small Family Car’ category for the second year running. Achieving the best-in-class accolade in such a competitive category really demonstrates how the C4 Cactus’ ideal blend of personality and practicality is perfect for families.’

Citroën C4 Cactus boasts a bold personality with striking features such as the innovative Airbump ® panels that protect the car from small everyday dents and scrapes.

The presentation of the Honest John award comes only days after the highly-acclaimed C4 Cactus scooped another top honour in DieselCar Magazine’s ‘Top 50’. These accolades add to the impressive list of UK industry awards received since the car’s launch in September 2014.