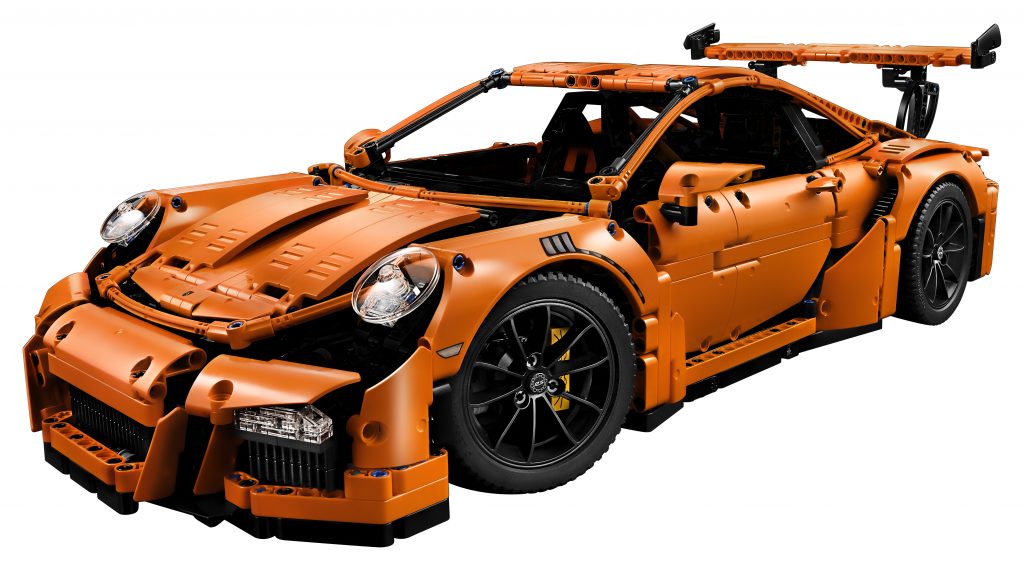 One of the latest models in the legendary 911 family, the Porsche 911 GT3 RS, is appearing as a detailed LEGO® Technic model. The exclusive LEGO set of the exceptional sports car, which has been developed in close conjunction with Porsche AG, will initially be available at shop.LEGO.com from June 1st, 2016, as well as in the 13 LEGO stores throughout Germany and Austria. It will be available in other stores from August 1st, 2016.

Like every sports car with the Porsche emblem on the hood, the LEGO version of the Porsche 911 GT3 RS also combines design, performance, and functionality. Still concealed in black-and-white foil as a mystery model at the Nuremberg toy fair late January, the color of the characteristic bodywork has now been revealed and shines in bright orange. Thus, it corresponds to the special coating of the original sports car in lava orange authentically. The model, which has 2,704 elements, also delights the beholder with sleek, aerodynamic lines and an adjustable rear spoiler. Besides many authentic features, the packaging and accessories that come with this complex LEGO Technic model also contribute to a building experience rich in variety: among other things, the box contains a comprehensive collector’s book with exclusive background information on the development of the model. Furthermore, the elements of the individual assembly groups are packed in separate boxes for the first time and, together with the detailed instructions, provide an insight into the assembly process of the actual vehicle.

The LEGO Technic Porsche 911 GT3 RS combines design and functionality
According to Ferry Porsche, driving enjoyment is not created by comfort –quite the opposite is the case. Consequently, the LEGO model also features a few rough edges that give it identity and character, just like the powerful original on which it is based: the authentically recreated bodywork is convincingly realistic with its characteristically low and sloping design, the large cooling air intakes at the front, the surface contouring of its roof and compartment lid, the unique front wheel arch air outlets of the lightweight carbon fenders and the striking rear wings.

Both the performance and the sportiness of the original have been realistically reproduced in various technical features on the LEGO model. One particular highlight is the fully functional Porsche double-clutch transmission with four gears and gearshift paddles on the steering wheel. But all technically minded LEGO fans will especially love building and playing with the six-cylinder boxer engine with moving pistons underneath the rear lid.

In addition to the technical features, the interior of the model is also authentic and close to the original. A detailed dashboard, a steering wheel with gearshift paddles, racing seats, and a glove compartment concealing a unique serial number can all be found in the easily accessible cockpit. Using this serial number, additional exclusive content can also be released from June 1st 2016 by following www.lego.com/technic.

Further product highlights on the LEGO Technic Porsche 911 GT3 RS for master builders aged 16 and over include:

Opening doors and hood
A trunk with case
Authentic stickers to give the model the faithful final touch
Rims in the original design with RS emblem
The LEGO Technic Porsche 911 GT3 RS is a 1:8 scale model and is 17 cm high, 57 cm long, and 25 cm wide.