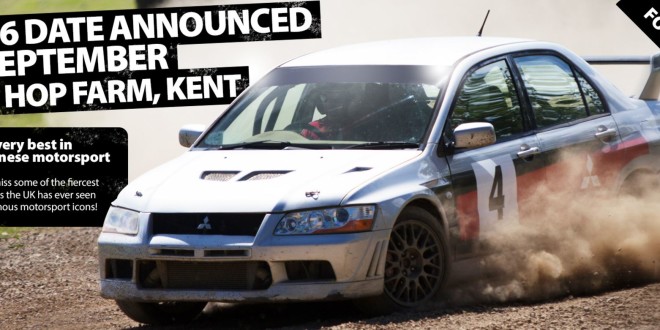 A new event from the UK’s best-known Japanese performance car show brand looks set to become one of the must-attend highlights of the calendar when it opens on September 11, 2016.

Completing a hat-trick of Japfest events in the UK for the 2016 season, the Motorsport Heroes event will be based at the family-friendly Hop Farm near Paddock Wood, Kent, and will bring together some of the most exotic and iconic Japanese models to have featured in the worlds of rallying and motorsport.

From Subaru Imprezas and Mitsubishi Evos to classic Toyota Celicas and Datsun 240Zs, the world of rallying is expected to be extremely well represented, while stars from other forms of motorsport will also form part of the themed displays.

But it won’t be solely Motorsport Heroes on display, with all Japanese cars welcomed into the show. The event will host a large club display area with a Motorsport Heroes theme, Rally Passenger Rides, a Show & Shine and a Retail Village featuring a vast array of parts, accessories and clothing.

Individual display tickets, for those not exhibiting with a club, are also available, while a number of other exciting features are being planned, and will be announced via the event’s website and social media feeds.

The venue offers much more than a traditional car show – as a family-friendly tourist attraction in its own right, the Hop Farm features a number of children’s rides and attractions* to combine an octane-fuelled car-themed day out with something to entertain the whole family.

For those wanting to make a weekend of it, camping is available on the evening of Saturday, September 10.  Advance tickets are now available priced at £13 for the weekend (including camping), or £8 for show entry with free tickets for up to two accompanied children (£5 per additional child). They can be booked online atwww.japfestmotorsportheroes.co.uk