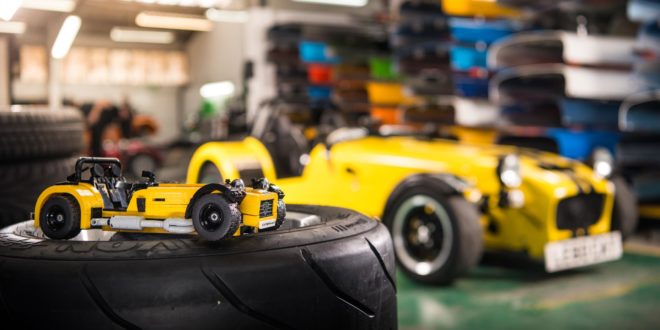 Caterham has today unveiled a brand new model which features a rather different build process to its usual run of 500 cars a year – the brand’s very first immortalisation in LEGO® form.

Technicians from the legendary British sportscar manufacturer have downed their tools and picked up the plastic, teaming up with the equally iconic toy maker to create the first ever LEGO Caterham, due to hit the shelves this October.

Originally submitted by fanatic Carl Greatrix to the LEGO Ideas platform, in which fans can submit their ideas for new LEGO sets, the Seven gained the requisite 10,000 votes and the LEGO Ideas Review team selected the 620R to go into production.

Consisting of over 770 pieces, including a replica 620R engine and gear stick, the LEGO Caterham stands 10cm tall and 28cm long. Other unique features which may cause fans to blow a gasket include:

Caterham Chief Commercial Officer, David Ridley, said: “Caterham has always prided itself on producing bespoke, hand-built cars for its customers. Our army of fans who build their own Caterham Sevens are equally discerning when it comes to the detail and craftsmanship which is central to Caterham, and we worked closely with the LEGO team to ensure the LEGO model replicated that.

“The LEGO 620R has various unique features – the intricately-designed engine was certainly a surprise when we lifted the bonnet for the first time. It’s really satisfying to know that fans can recreate and build their own 620R with LEGO bricks.”