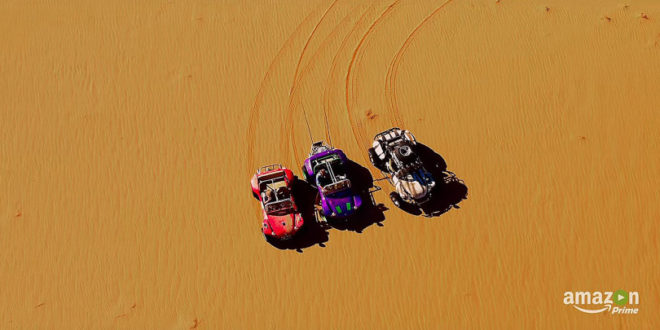 According to sources at The Sun, who have inside information regarding the opening shot of the first episode of The Grand Tour. It reportedly cost £2.5 million just to film that scene, which is claimed to involve six jet planes, 150 cars, 2,000 petrolheads, and many acrobats and stilt-walkers.

Clarkson, 56, and sidekicks Richard Hammond and James May sped across the Lucerne Valley in customised red, white and blue Ford Mustangs.

The trio were followed by £20million worth of cars, including a Bugatti Veyron and Rolls-Royce.

A source said: “Nothing remotely like it has been seen before.”

The first episode of The Grand Tour will air on Amazon Prime on November 18th, 2016. It will be followed by the rest of the season, which unlike other online shows will be released weekly.

To view The Grand Tour, you will need an Amazon Prime Subscription. You can get a 30 day free trial here: