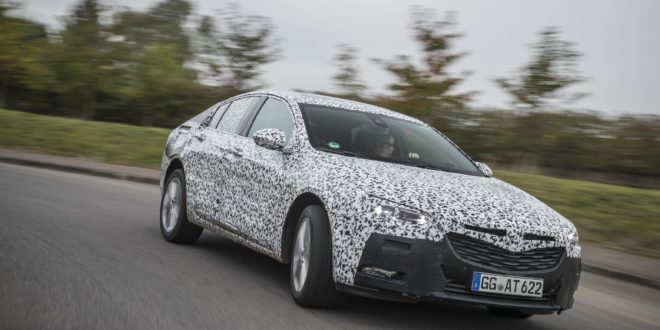 Covered in camouflage, Vauxhall’s all-new flagship model, which will be known as the Insignia Grand Sport, is in its final stage of development on UK roads before it makes its world premiere at the Geneva Motor Show next March.

The Insignia Grand Sport is a five-door hatchback that is based on a completely new architecture and has a considerably longer wheelbase (by over 9cm) than its predecessor. But thanks to markedly shorter front and rear overhangs, it is only 5.5cm longer than the outgoing model. The 1cm wider track and 3cm lower roofline emphasise the Insignia Grand Sport’s dashing presence. These altered proportions give the next generation of Vauxhall’s flagship a look that is more athletic and striking than ever before.

And by using lightweight materials, Vauxhall engineers were able to shave up to 175kg off of the new model. Optimised packaging also allows for a much roomier interior and cutting-edge technology on board.

At the 2013 Frankfurt Motor Show, Vauxhall gave a glimpse into the future of the automobile with the visionary Monza Concept Study: light, athletic, and efficient, with cutting-edge connectivity. The new Astra, which was named “Car of the Year 2016”, follows this philosophy. With the Insignia Grand Sport, Vauxhall now launches a model that further realises these standards and takes them to the next level.

The newcomer is noticeably larger than the current Insignia both inside and out, putting it in another league in terms of size, roominess and comfort. And of course, Vauxhall continues to make the latest technological innovations available to the widest audience at an affordable price.

“Vauxhall is raising its game even further with the launch of the new Insignia Grand Sport,” said Rory Harvey, Vauxhall’s Chairman and Managing Director. “It will set new standards for design, efficiency, technology and connectivity when it debuts next year at the Geneva Motor Show.”