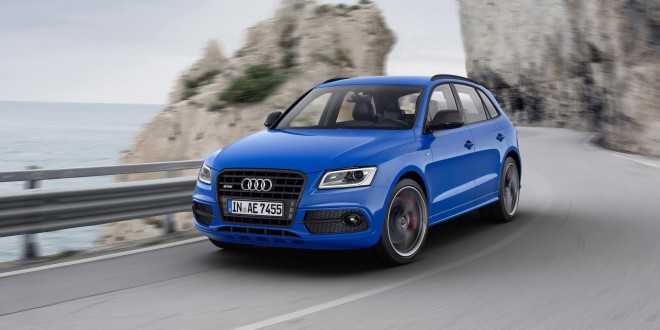 AUDI EMPHASISES THE ‘S’ WITH NEW PLUS VERSION OF SQ5 TDI

The already formidable Audi SQ5 TDI reinforces its status as a practical SUV delivering genuine sportscar pace this week as it becomes the latest Audi ‘S’ model to undergo the performance-intensifying ‘plus’ treatment. With more power, more torque and more equipment than its ‘standard’ counterpart, which is notable as the first ever diesel-powered Audi S model and remains in the line-up, the new SQ5 TDI plus will be available to order later this year. UK pricing will be also be confirmed at a later date.

The biturbo V6 TDI at the heart of the SQ5 TDI plus produces 340 PS from its three litres of displacement by way of increased injection pressure. This results in 27 PS more power compared to the current SQ5 TDI. Its peak torque is increased by 50 Nm (36.9 lb-ft) to 700 Nm (516.3 lb-ft), enabling acceleration from rest to 62 mph in a mere 5.1 seconds; top speed is electronically limited at 155 mph. According to the NEDC combined cycle consumption test, up to 42.8mpg is also potentially  achievable with emissions of 174 g CO2/km, which along with the plentiful torque serves as just about the only reminder that this performance flagship prefers diesel.

Like all S models from Audi, the SQ5 TDI plus delivers its power to the road via the quattro permanent all-wheel drive system. For the first time on a Q5 variant, a sports differential at the rear axle actively distributes the drive power between the wheels.

More immediately noticeable clues to the plus version’s status can be found externally, where its rank is conveyed by gloss black 21-inch cast aluminium Audi Sport wheels in 5-twin-spoke star design and an extended black gloss package taking in the exterior mirror housings, door handles, roof edge spoiler and rear diffuser. A further visual customisation feature on the exterior are two clasps that join the four exhaust tailpipes in pairs.

Inside, diamond stitched fine Nappa leather upholstery further enhances the SQ5 sports seats in the plus version, and the sliding rear bench seat plus also features as standard to increase variability and enlarge the luggage compartment, if necessary.